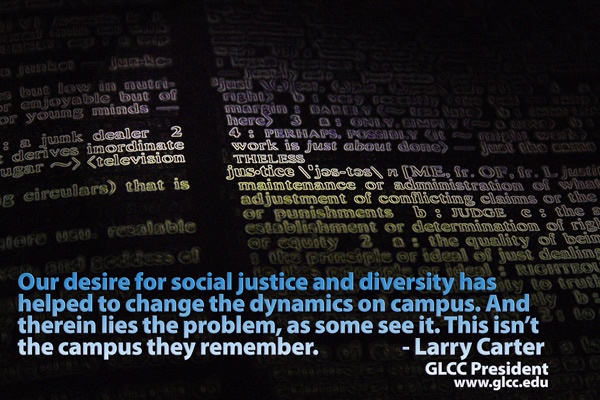 It is interesting to me how particular we are when it comes supporting various causes. On our campus we have seen a growing interest in matters concerning social justice. It has been great to see students become passionate about the rights of others – whether they are found in the sweatshops of Southeast Asia or on the coffee plantations of South America. We have individuals on campus who make it their duty to hold the college’s feet to the fire when it comes to Fair Trade issues. They are so fired up that they seem disappointed when I tell them we purchase our coffee from a company that practices Fair Trade. But, often it is those same students who can’t seem to bring that same passion to social justice issues at GLCC. Their righteous indignation isn’t as great when it means that they have to make personal allowances for others. Their passion for social justice wanes when it means that they have to rub shoulders with those who aren’t like them.

We have been trying something new here at GLCC. Instead of just having a sentimental kind of compassion for those who have been victims of social and economic disadvantage – instead of simply wringing our hands or wiping an occasional tear from our eyes over those who never seem to have it easy or good – instead of having a long distance, overseas relationship with those who have been exploited and abused - we wanted to make a difference right here and right now. As a result we have been recruiting students who have never had the economic or educational opportunities our formerly typical small town, suburban students have had. We have gone to the city.

Our desire for social justice and diversity has helped to change the dynamics on campus. And therein lies the problem, as some see it. This isn’t the campus they remember. There are people here that don’t think like we do or act like we do. The thinking goes, “Hey, I’m all for social justice and helping to change lives as long as I’m comfortable with it. But, when I see things or experience things that don’t fit with what I think are appropriate – well, then, maybe THOSE KIND OF PEOPLE can go some place else.”

I seem to remember Jesus having some difficulty with religious well-meaning believers when He attended a party or two that didn’t reflect their own morals or spiritual standards. I am sure the Pharisees contributed to various charities for the down and out. And that was okay – as long as the down and out didn’t become the up and in.

I don’t think Jesus was condoning bad behavior on those occasions. He was simply reaching out in love to those who didn’t fit the accepted religious mold. Likewise, we aren’t condoning bad behavior. We simply want to give an opportunity to those who haven’t had one. There will be some problems to be addressed in the transition. But, to be honest, I am more concerned about the attitude of some of our students compared with the behavior of others.