The President's Pen: Let's Get Real 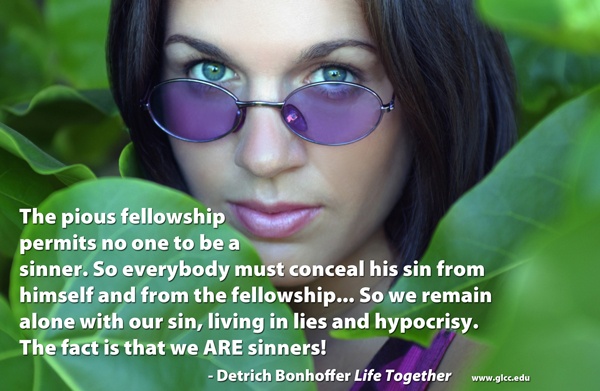 After reading Dietrich Bonhoeffer’s recent biography I felt compelled to pull his books back off the shelf and read them again. It has been years since I was challenged by his writings. I started with Life Together and was impressed all over again. Even though he wrote the book in 1938 his words are just as relevant today as they were then.

In talking about confession in the church and how the lack of it has limited true fellowship, he states, “The final break-through to fellowship does not occur, because, though they have fellowship with one another as believers and as devout people, they do not have fellowship as the undevout, as sinners. The pious fellowship permits no one to be a sinner. So everybody must conceal his sin from himself and from the fellowship. We dare not be sinners. Many Christians are unthinkably horrified when a real sinner is suddenly discovered among the righteous. So we remain alone with our sin, living in lies and hypocrisy. The fact is that we ARE sinners!

But it is the grace of the Gospel, which is so hard for the pious to understand, that it confronts us with the truth and says: You are a sinner, a great desperate sinner; now come, as the sinner that you are, to God who loves you. He wants you as you are; He does not want anything from you, a sacrifice, a work; He wants you alone.

The misery of the sinner and the mercy of God – this was the truth of the Gospel in Jesus Christ.”

Somehow, as Bonhoeffer intimates, we have lost the ability to be real in the church. From the time of Adam and Eve it has become an almost natural instinct to cover up – to hide from God’s truth. We design fig leaves of self-righteousness and phony piety thinking to disguise the fact that we have sinned and are sinners. No wonder then that most church fellowships are skin deep and shallow. Balzac, walking into his private library after enduring another boring cocktail party was reported to have said, “Now, for some time alone with real people!” I think we know what he meant. How many churches have we gone to where we felt that something was missing? The worship was fine, the preaching good, but still, there was something missing. Perhaps what we missed was spending time with real people – people who knew they were sinners who were saved by the grace of God. Spending time with the “devout and the undevout.”