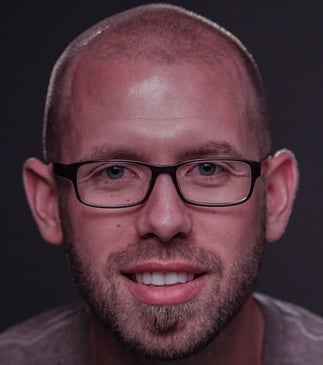 Our world is always changing and the path Kris Bargen, a 2006 graduate of Great Lakes Christian College, was taking changed about four times during his five years at GLCC.

When he first told his church he was going to GLCC, he joked he would go there for a year, meet a girl and then go to Michigan State. Everyone laughed, but the statement turned out to be half true. Kris met his wife at freshman orientation; he never went to Michigan State.

While at GLCC, he knew he wanted to work in a church, he just didn't know how. His major changed, along with his interests, from Youth Ministry, to music worship. From there he wanted to expand his church studies. So, he focused more on the general Theology classes.

Throughout the many changes, he was always convinced of one thing, that he wanted to communicate. While doing that from the pulpit just wasn't his personality, he did discover a book that studied the theology behind filmmaking. "It showed that everything was connected to a message and God, even in the movies." This discovery led him to write his senior paper on Hollywood as a modern day pulpit. After having his first child and purchasing a video camera, Kris began making movies. This choice stuck. He was a part of GLCC's first film fest, taught at GLCC and continued to study film at LCC.

And, it's what he's doing now, "It was just an interesting course that brought me here."

After graduation and time spent working for GLCC, a series of events led him to a church in Arizona where it was by simple coincidence he even stepped inside. The church had a job opening and Kris happened to be looking for more stable employment, so he applied. Everything moved pretty fast and he got the job, had a baby and moved all right around the same time. "It seemed like divine orchestration, just being there."

After GLCC,  Kris became the Video Producer, at Christ's Church of the Valley in Arizona for three years, which was his second job at a church and he gained great experience working with a congregation of 25,000. He produced the video content, music videos, animations and more, that play during the services. "It's definitely about trying to communicate a message," says Kris. And he credits his time at GLCC for giving him the skills to be able to communicate that message. "GLCC helped me form a knowledge of God's word that I am spending a lifetime building upon and growing in. It prepared me to be a person of God."

Today Kris is the Video Producer at Southeast Christian Church in Louisville, KY.  His experience with Christ's Church of the Valley has opened up broader opportunities at Southeast.

More than an education, Kris is thankful for the environment GLCC offered during a time of change and uncertainty. "It allowed me to cross through the threshold into adulthood in a safe, God-fearing environment." He also adds that the school taught him the importance of community and a disciplined prayer life, "And that impacts every single moment and aspect of my life."

And, even though his studies at GLCC didn't teach him how to light a scene or specifics about editing a film, he says, "I did learn how to rely on the creator for my every thought and breath." This was especially important during Kris's ever-changing journey through GLCC, toward the life he has now. "He orchestrated the course of my life, and it's no coincidence that I attended GLCC. This is becoming more clear to me as each year goes by."