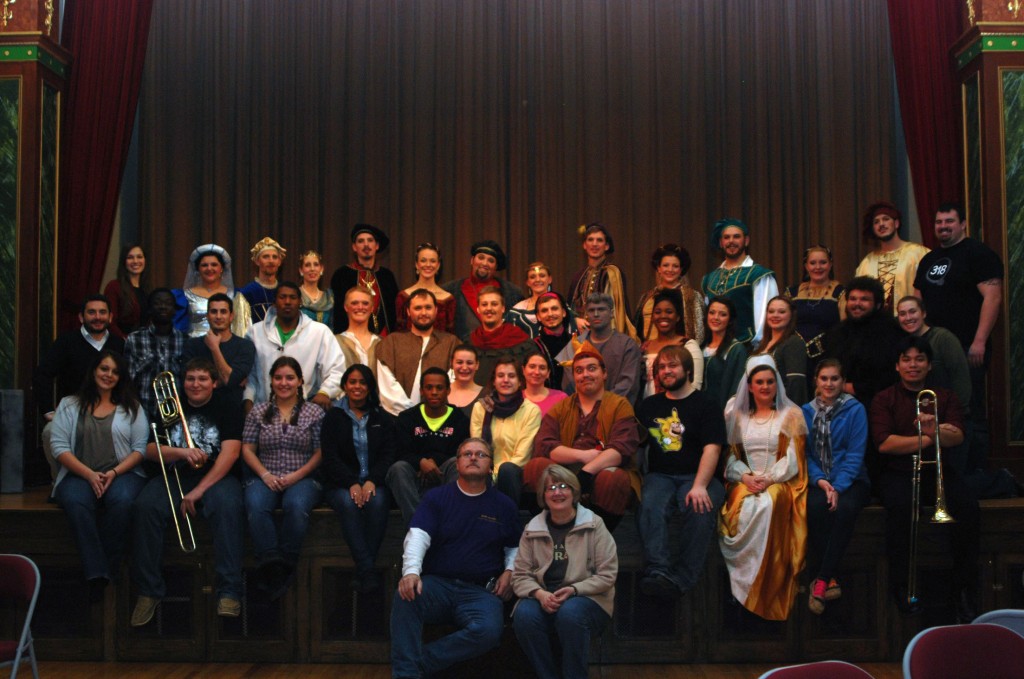 For 40 years, Great Lakes Christian College hosted a Madrigal Dinner Concert Series at the Central United Methodist Church, in downtown Lansing, MI, and helped the community usher in the Christmas Season. Over the years, guests of the Madrigal Dinner have collected wonderful memories of the jester’s antics, of a lively troupe of drama players, and of the Madrigal Singers’ acappella music, all of which helped us remember the real story of Christmas. 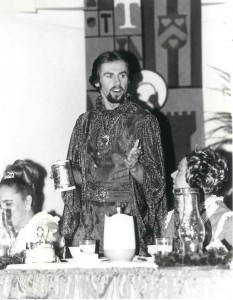 For forty years Great Lakes Christian College has celebrated the Incarnation of our Lord through the Madrigal, showcasing the talents of the students through this unique Christmas program. The singers, players, orchestra, props and lighting staff, make-up and costumes personnel, servers for the guests—all student volunteers, all endeavoring to bring the true Christmas message to the forefront.

For the past thirty-five years I have had the pleasure of co-directing the Madrigal. I’ve had the pleasure of listening to “all but angelic” voices sing of Our Savior, of watching the players entertain and edify the audience through drama. I have been constantly amazed at the talents of our student body, at the ability of Esther Hetrick to direct the music to such excellence.

This year we begin a new program, one with the same intent: to give the Lord Jesus proper praise through our best efforts. We invite you to our campus this year to celebrate with us through a variety of songs the Good News—our Lord Jesus Reigns! - George Brown, Professor of English

Here are some of our best madrigal memories:

Many great memories connected with Mads. I was so blessed to be able to be a part of so many different aspects of the production over the last 14 years. Madrigals was truly loved by all who attended and was a perfect way to start the Christmas season. It is now exciting to see a new chapter start with a new GLCC Christmas event. It's good to hear that the wassail will still be served. That's a favorite!....as long as it's not made with salt. – Emily Bargen (Beavers, BRE 2005) 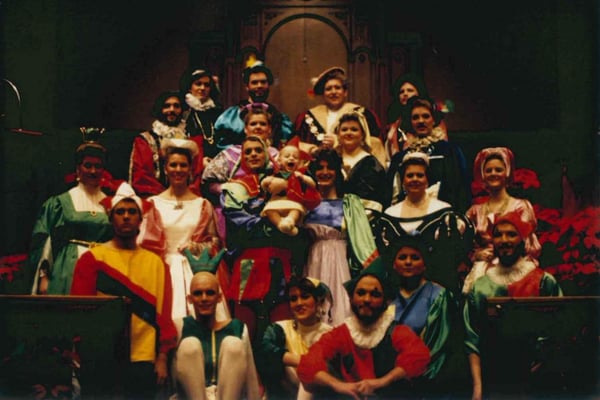 Madrigals will always hold a special place in mine and my husband's hearts! While we both were involved with Mads, each in our own way, we especially love that it was at Mads that we got engaged! Thank you for 40 great years! – Tracy (Hughes) Weller 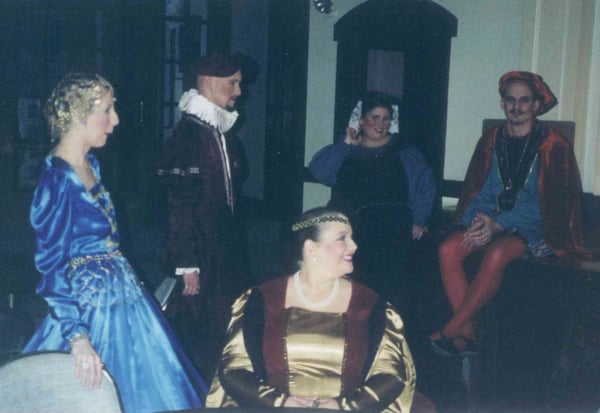 Phantom of the Opera is the longest running show in the history of Broadway and you beat them by fifteen years! What an accomplishment! A basketball court on the third floor. Dozens of people shoved in a little room applying makeup. Searching through the building to find the bowling alley. Sneaking in a Big Mac and then having to eat it with a fork and knife under the watchful eye of Gary Gregory. Costumes by Sherry Gregory. Listening to the autoharp to get a starting pitch. An impossibly high tenor part on The Boar's Head Carol. What great memories. Thanks, GLCC, for forty great years. – Frank Weller (BRE 1989) 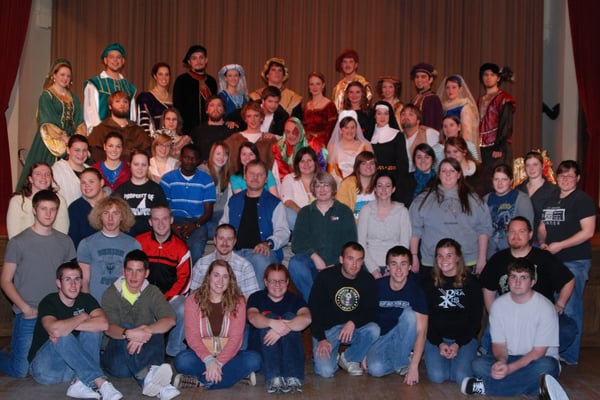 I had one of my children in Madrigals for years, in the choir, actor, and support crew. Many good memories of attending each year to see them perform. – James B. Pahl 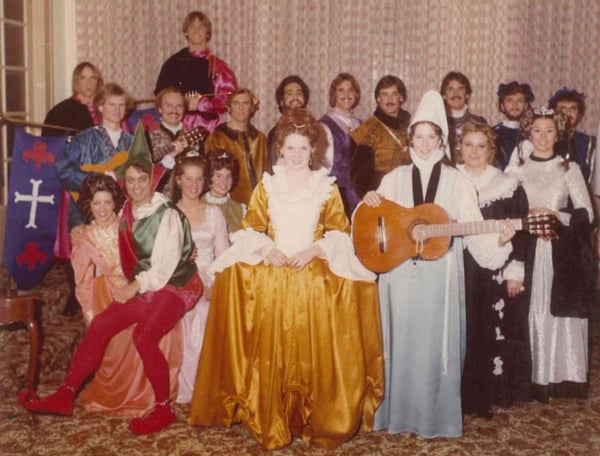 Mads has so many awesome memories for me. My very favorite one is the night I picked up my then-boyfriend from Madrigals dress rehearsal and was surprised by a marriage proposal from the stage! After I said yes, the cast surrounded us to congratulate us... it was a very special night. – Sarah Monette (1999-2001) 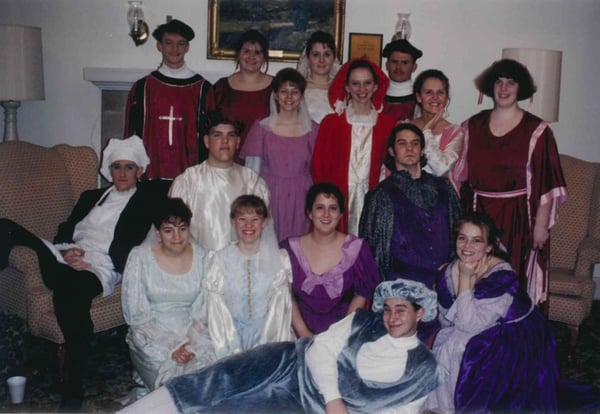 Being in Madrigals at GLCC gave me some of the absolute best memories of my college life, too many to mention here. A huge thank you to all Great Lakes staff for all they put into it all these years! – Cherene Marckel 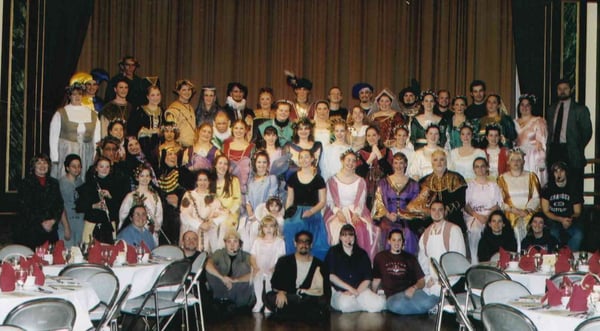 Sherry and I enjoyed many a Madrigal over the years. My favorite picture of our "kids" Jeremiah Johnson, David Johnson, Sarah and Scott Monette was taken at Mads. "Don't regret that it's gone, rejoice that it happened!" – Dan Johnson 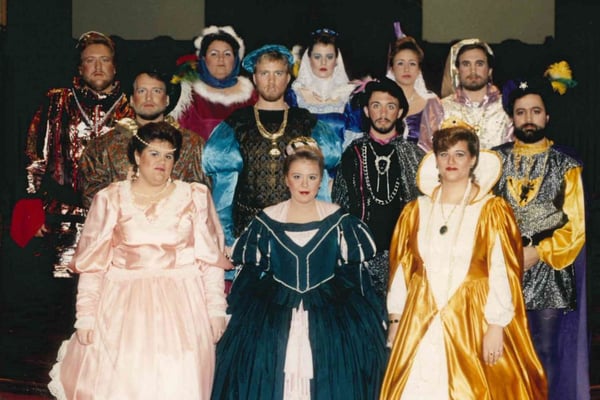 Madrigals was a wonderful tradition. I loved being involved in every aspect of the production, including the joy that it brought to performers, servers, and audience members alike. The glory of God shone through every performance. – Julie Hartley 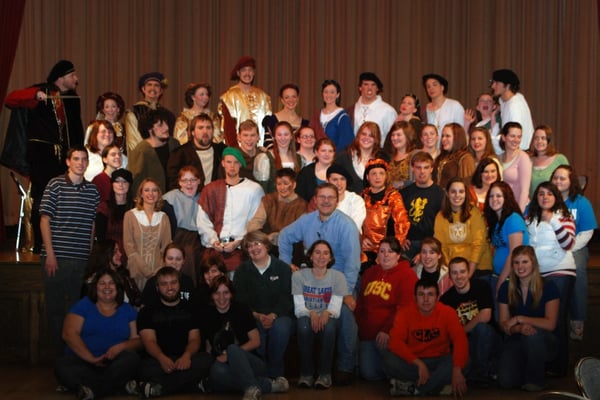 I was in Madrigals the first two years, 1973 with John Wakefield, and 1974 with Shockley Flick. Wonderful memories. I remember in '73 when John took a few of us to show us the building that we would be using. It was awesome. We were so excited! – Denise Gulley Reniger 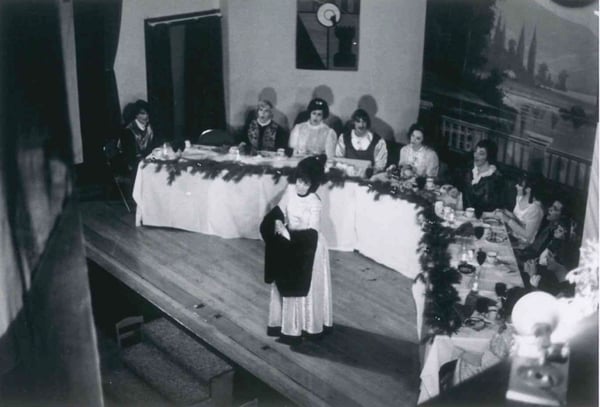 I loved singing in Madrigals in fact that is what brought me to Great Lakes while all my friends went to Lincoln. So many wonderful memories!!! – Lois Richardson Shive 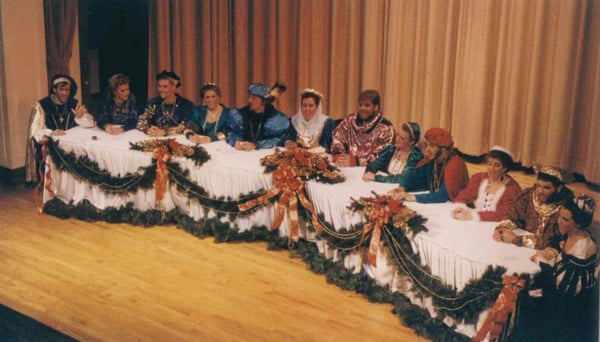 I was a part of the singing group for the First Madrigal dinner and concert. It was an experience that I will never forget and always treasure. I felt like I was wearing the inside of a couch as my tunic was made out of heavy upholstery material and it was quite warm. I enjoyed the friendships and the atmosphere of it all. – Stanley Ray Johnson (BRE 1974) 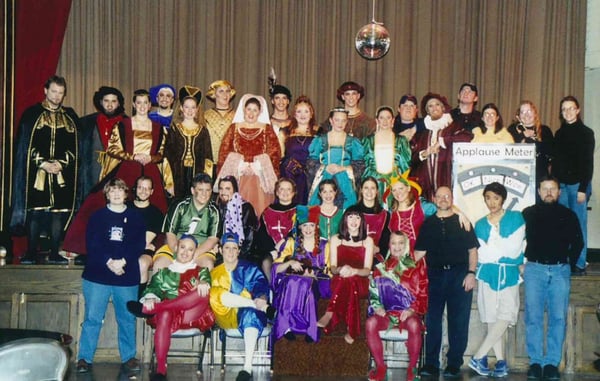 I sat next to Tony Milliman one year on stage and he taught me to put butter patties in my wassail! It helped to clear the vocal chords so I could hit the LOW alto notes with ease! Gary Gregory was blown away by my voice!! Thanks Tony!! – Karyn Hardy Harrison 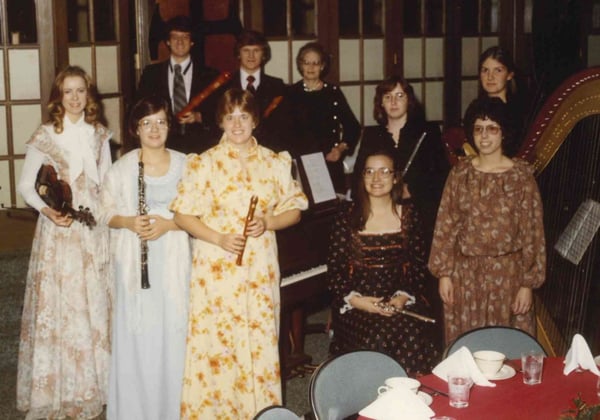 The seeds for the GLCC Madrigal Dinner-Concert series were planted over 40 years ago in the spring of 1973. Desiring to increase student interest and knowledge of Medieval Western Civilization, Professor Lloyd Knowles investigated to see if there were any Madrigal Dinner-Concerts being presented anywhere in the Greater Lansing area (Milligan College, from which he graduated, had begun doing it as an annual event, though he’d never attended one). Not locating any such area production, Lloyd approached music professor John Wakefield and inquired about the possibility of doing one ourselves. His original answer (for reasons I cannot recall) was negative, but a few months later John and Vickie, his wife, decided to undertake the venture.

First, the question was discussed as to why we should engage in this activity. Two reasons were advanced: (1) GLCC was virtually unknown in the Lansing community and such a production done with high quality might remedy that; and (2) it would be an outreach opportunity of the college to pursue the message of Christ at Christmas time in an increasingly secular society.

Next, a committee was formed in order to efficiently implement the effort. John and Vickie Wakefield were in charge of the music; Curtis Lloyd would oversee the promotion and other P.R. aspects.; Jim Myers was accountable for any of the business issues; Lloyd Knowles was responsible for scenery and decorations; and Lee Doty wrote the drama and Jester’s lines.

Central United Methodist Church was contacted, reserved, and rented as the site for the production (where it was held for all 40 years). Great Lakes Bible College students procured such items as old surgical blankets from St. Lawrence Hospital to be made into decorative banners for the hall, with Jay Wager leading out in some of the artwork. Lloyd Knowles ‘borrowed’ (in exchange for an advertisement in the programs) six armored knights from Trevino Imports, and four years later purchased all six for a total cost of $75 (we had a very low budget to work with).

It was decided that our first event would take place on three nights (Thursday, Friday, and Saturday), and most of us were worried about being authentic for the time, and in much prayer about the quality of the production. Dr. Elwyn Miller, a swine nutrition professor at Michigan State University and an elder at the University Christian Church, donated the ‘boar’s head for many years. [Yes, it was a real pig’s head!]

Two students (Ann Winans and Linda Dibble) prayed in ‘the loft’ throughout the whole first night, fearing a possible failure and embarrassment for the College and our purpose. But when three ladies who were members of the Society for Creative Anachronism attended as guests richly dressed in authentic garb of the period, and upon exiting at the Madrigal’s conclusion commented that it was “one of the better” Madrigals they had attended that year, our fears were allayed and we praised God for His blessings. 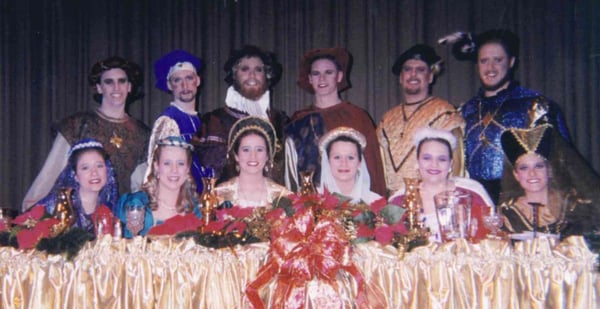 It’s always a little sad to see the end of an era, but as Chaucer said, “All good things must come to an end,” and we will no longer perform the Madrigal Dinner. However, as we look to the future, we hope to make some new memories, on our campus, and we invite you come enjoy an evening of music and drama, to welcome in the Christmas season.

NEW LOCATION…
We will be hosting a Christmas event on the campus of Great Lakes Christian College, in the Doty Center. In contrast to maneuvering around downtown Lansing, we can promise little traffic congestion, plentiful parking spaces, and easy access.

NEW FORMAT…
Rather than a full meal, we will be providing a couple of the best features of our previous format—wassail and a choice of desserts. This means the cost will go down to $10 per person or $75 per table (seating for 8).

SAME EXCELLENCE IN MUSIC…
As before, the Music Department is working with our music groups to share the lovely strains of carols and Christmas music, in a variety of settings. Instrumental musicians will provide Christmas music throughout the evening as well.

SAME EXCELLENCE IN ENTERTAINMENT…
With humor and poignant truth, the Christmas story will be re-told. We anticipate that the atmosphere, dessert fare, lively drama and concert will be a fun, unforgettable evening.

Please plan to save the dates of Thursday December 12 or Friday, December 13, to join us for Christmas on Campus. 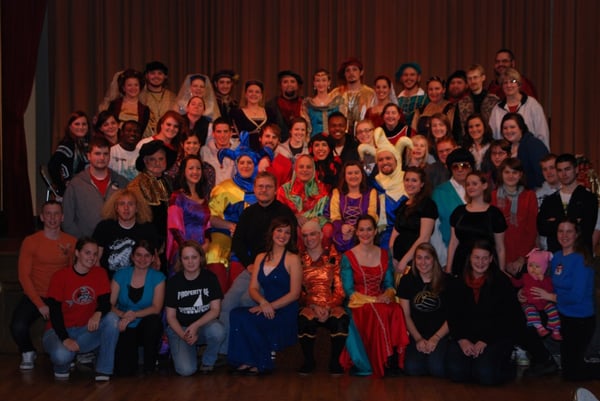