The Great Lakes Men's Basketball team signed two players recently for this upcoming 2016-17 season. James White from Kalamazoo Valley Community College and Preston Brooks from Spring Arbor University, have now made it official on suiting up for The Lakes this coming winter.

James hails from Portage Northern High School, where he played basketball. James is the son of James and Lerese White, and has a brother, Jaron, and sister, Jamara. In his free time, James enjoys singing, collecting shoes, hanging with family and friends, and playing with his dog. James plans on pursuing sports management.

Preston went to Mattawan High School and played high school ball there. During his playing career at Mattawan, he was a team captain and the most improved player. Preston is son of Joel and Yvonne Brooks, and plans on pursing business management here at Great Lakes. 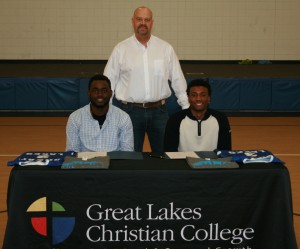